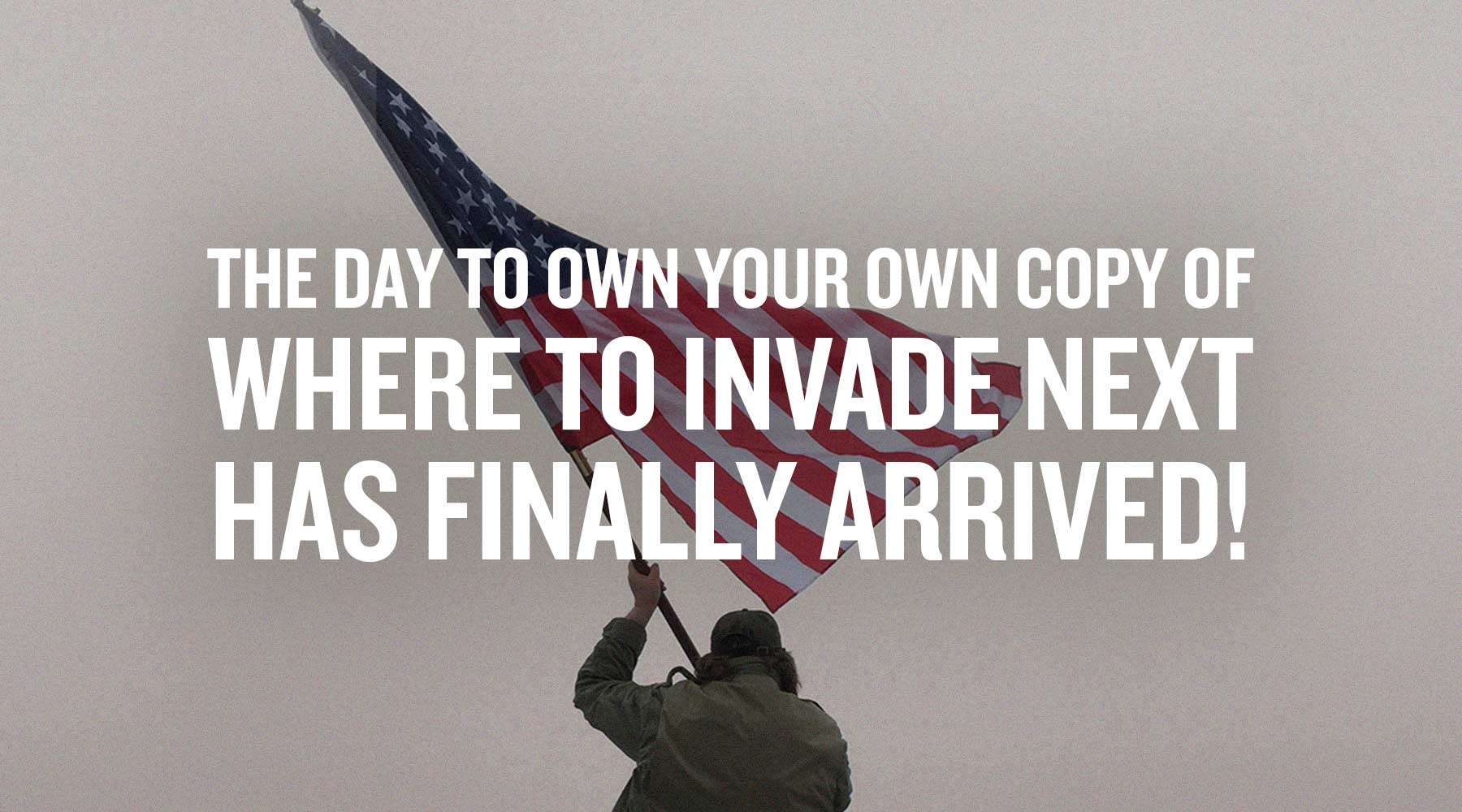 The day to own your own copy of WHERE TO INVADE NEXT has finally arrived! http://apple.co/1N3pzw1 http://gwi.io/5sx3t4

I’ve been waiting for this day for seven long months — the day when you and I get to bypass the company that owns the theatrical rights to the film and bring my new movie DIRECTLY to you. Put it in YOUR hands to own, watch it when you want, show it to whomever you want. No more middle man! No more trying to find out where the hell it’s playing! No more $9 popcorn!

Just you and me and my new movie, the aforementioned, much-acclaimed, and Oscar-shortlisted WHERE TO INVADE NEXT.

Beginning today, right here, right now, you can download and own my movie thru iTunes http://apple.co/1N3pzw1 or Amazon http://gwi.io/5sx3t4

And in just 12 days, beginning on May 10th, you can buy it on DVD/Blu-ray, or rent it to stream (real cheap!) on iTunes or Amazon, or watch it on your cable or satellite system’s OnDemand channel. Yes, it will now be THAT easy to see what many have called not only the best documentary of the year, but one of the best MOVIES of the year. Time to find out if they’re right!

WHERE TO INVADE NEXT is, as one critic pointed out, my “most dangerous and subversive film.” It’s dangerous because it shows the American public exactly how we can achieve, quite easily, a very decent society. One where we all take care of each other, where there’s true, free and universal health care, a stunningly amazing educational system, a place where no one needs a second job, everyone gets at least a month’s paid vacation, all families have paid maternity and sick leave, where the war on drugs is over and the prisons are now half-empty because people got help or were just left to live their lives in peace. There is a whole world out there where I take you from country to country to country and expose all the lies we’ve been told:

*The French don’t pay more “taxes” than us — they actually pay LESS than we do;

*College doesn’t have to bankrupt you — in fact, even the poorest of countries can afford to let everyone go to university for free;

*Imagine countries where their justice system is not set up to mass incarcerate one particular racial group;

*Instead of spending their money on war and invading countries, what would you say if I showed you how ALL the other democracies spend their money on their people?

*And the number one thing I saw, over and over: Where women have true political and economic power, EVERYONE’S life gets better. Imagine that.

Those places actually exist — and it’s called… the rest of the civilized world! We’ve been lied to and misled for too long. And I don’t just talk about this — I SHOW YOU the schools in Finland, the prisons in Norway, the bright and humane factories in Germany (where everyone makes a middle class wage), the public school lunchroom in France where students are fed a four-course meal, and you get to meet the college students in Slovenia who have absolutely no frighin’ idea what a “student loan” is.

This is what makes WHERE TO INVADE NEXT so subversive, because if enough of you see this movie, that’s it. Once millions have this information — and inspiration — the game is over. For Wall Street. For the bought-off politicians. For the boss or the dean or the candidate who keeps telling you “it just can’t be done!” That’s collectively the biggest con ever, and I am here to blow it up once and for all with this movie.

That’s why I so desperately want you to see WHERE TO INVADE NEXT. You’ve probably already read on Twitter or Facebook people calling it “my best film ever.” I have no problem with that statement. I’m convinced it’s the best thing you’ll see this year.

So, click here — iTunes: http://apple.co/1N3pzw1 or Amazon: http://gwi.io/5sx3t4 — to download and own it right now. Watch it tonight or this weekend. It’s funny, it’s jaw-dropping, it’s the best use of two hours I can recommend for you (short of the other obvious choices you can partake in in the privacy of your home).

Let me know what you think! I’ll be on Facebook this Sunday from 4 to 5pm ET taking your questions and discussing the film with all of you.

Own this movie! You will not be disappointed! You will be uplifted, entertained, astounded, blown away, mad, thrilled and re-energized. This I promise you, and I don’t think I’ve ever let you down.

P.S. To answer the most anticipated question — “When will it be on Netflix?” — um, well, it’s not. That’s a juicy story for a later time (in my forthcoming book, “Hollywood & Me: The Kardashian Years”). Suffice it to say, I’d love to have it on Netflix. They’re great, they wanted it. But… well, if I told you what I’ve had to put up with from people OTHER than Netflix, you’d probably say, quit your bellyaching, at least you didn’t have to build Buicks for 40 years — and to that I say, Amen.