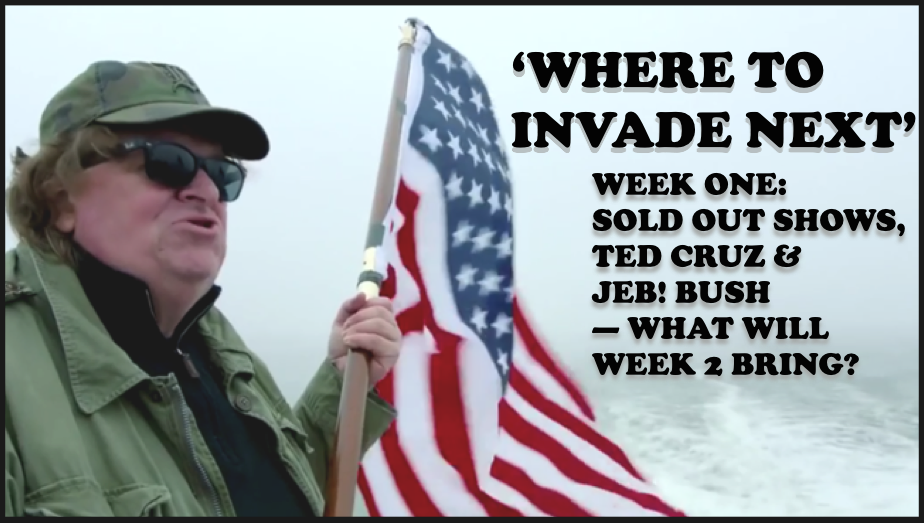 What an amazing first week of release for my new film, a week that came complete with being attacked by Ted Cruz, Lindsay Graham and Jeb Bush! Who plans this stuff for me? Thank you, patron saint of hack politicians everywhere!

So, today kicks off the second week of “Where To Invade Next”! Thanks, first, to all of you non-Presidential candidates who made this inaugural week so special. We were the top-grossing independent film of those that opened last weekend — and we placed at #6 in what’s called the “per screen average” of ALL films in release. We grossed more than three films that are currently nominated for Best Picture at the Oscars. This is a rare, rare thing for a documentary to do. And it’s all because of you, so gracias!

What was even more heartening were the numerous and consistent reports from theater managers across the country who, practically in unison, told us the following (with a charming tone of disbelief and shock in their voice):

1. “There are loud laughs and applause throughout the film and there is big applause and the end of every showing. This does not usually happen for most movies.”

2. “Some of the showings have sold out. That doesn’t happen for a documentary.”

3. “We sometimes have had a hard time clearing the theater or the lobby after the show because people want to stand around and talk about it.”

Of course, this is all music to our ears! Not to mention all the tweets and Facebook posts like: “I didn’t want it to end,” “This is by far your best film,” “I drove four hours to see it and had to sit in the second row,” “What a beautiful love letter to women and the proof that women in power make a better world for all,” “I brought my Republican father and at the end he said he liked Michael Moore!” and “Bernie keeps talking about ‘Denmark and Sweden’ but you showed us this isn’t some sort of Scandinavian fantasy — these ideas are actually happening everywhere but here!”

It’s been truly an amazing seven days. Thank you. I also can’t help but appreciate the healing power of it as I am now over that bout of pneumonia that had sidelined me. So, thanks for that, too!

Today begins our second weekend in theaters. The distributor has added a few more cities (Eugene, OR, Harrisburg, PA, Petaluma, CA, Littleton, CO, etc.,), and they will add more (they’ve promised 200 more). And they’ve kept all the ones from last week. By clicking here and typing in your zip code, you can find the nearest theater to you that’s showing it. Make a plan now to see it tonight or this weekend. As you know with documentaries, they get pushed out of theaters very fast by the big Hollywood movies (even when they’re doing well), so don’t put off seeing it. I can tell you from experience, even with my top-grossing docs, it won’t be there in a few weeks and I won’t be able to bring the DVD over to show it to you in person. So, call a friend or two, get a sitter, and go now!

And don’t forget to tweet (@MMFlint) or send me pix of you at the theater so I can re-post them for millions to see!

Finally, my personal thanks to Chris Rock, Patricia Arquette, Pharrell, Harry Belafonte, Gloria Steinem, Alicia Keys, Jane Fonda, and so many other artists who have said wonderful things about “Where To Invade Next” and have told their friends and fans to go see it. The support I’ve received from other filmmakers, and the creative community in general, has been overwhelming and so greatly appreciated. It’s not easy making the kinds of films I make, and even harder trying to massage my way through the corporate control of media to bring these truths to you.

Some day, I’ll tell you all about it. For now, just know that my favorite part of this first week has been watching, in the hours after the film’s release, Ted Cruz, Jeb Bush and other Presidential candidates using my name in vain, attacking me and holding me up as the one example of an American who is “the opposite of everything we (Republicans) stand for.”

Yes, I am. You get me, you really get me! For so long, I thought I was just misunderstood. But Ted and Jeb! — you know exactly what I’m up to, and you’re about to find out later this year just how many millions of me and people like me there are. Please be my guest and come see not only my movie, but the future — the near future — of your/our country that we’re going to fix.

P.S. The distributor apologizes to the people of Flint for not booking the film in my hometown last week and would like to make it up by opening it today in the two theaters there in Genesee County  – and making EVERY ticket to EVERY showing FREE all week long! The only thing their chief executive asks in return is that Gov. Snyder resigns! Thank you, distribution-company-with-no-name (DCWN²) but with a good heart!