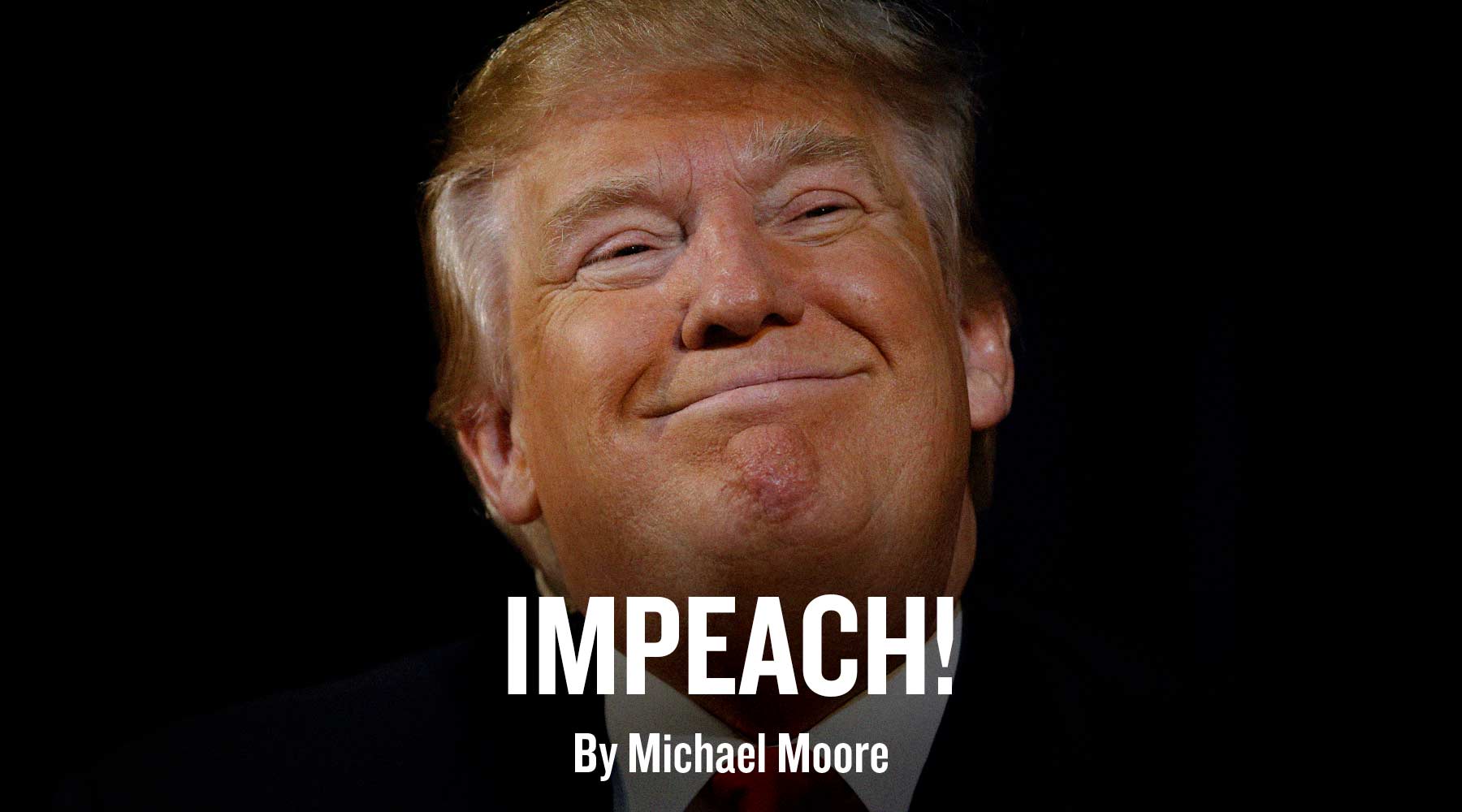 ‪It is time to remove this dangerous man from office.‬

I have just signed the “Need To Impeach” petition initiated by Tom Steyer of California. Over two million other Americans have also signed it. And that number keeps growing every hour. We — all of us — must not wait a minute longer to act.‬

Trump has sent a fleet of our ships into the waters off North Korea in order to provoke the unhinged leader of that country to make the mistake of attacking us. This, plus Trump’s reckless taunts at Kim Jong-un, is being done for one reason: to start some sort of conflict so that America will rally behind him and forget about the impending criminal indictments he, his family and his cohorts now face. He has put us all in danger, and he may get a lot of people killed.‬

‪The Founders of this country were worried that, from time to time, we would have a President who would behave in such a manner that would put our nation in jeopardy, or a President who would try to profit off being in office, or a Commander-in-Chief who might not be right in the head (King George III gave them a good example of that). They feared we could end up with a President who might be a traitor to our country. They even knew that we might get stuck with someone who committed not just “high crimes” but also “misdemeanors.” They wanted to make it easy for us to fix a mistake we’ve made.

‪My friends, we have the most colossal mistake in our history sitting right now in the Oval Office. And there is only one way to rectify it: TRUMP MUST BE IMPEACHED. We can NOT wait until November of 2020 for that to happen. We simply won’t make it til then. The country we know as the United States of America will not be the same after three more years of Trump. You know it and I know it. Turning the TV off and trying to avoid the daily insanity won’t make him go away.‬

‪Donald J. Trump has proven himself to be completely unfit for office, a threat to our country and an imminent danger to this world.‬

‪He is also not well. He is a malignant narcissist and an active sociopath. Because he holds the codes to, on his own, launch nuclear weapons, he is a singular threat to humanity.‬

‪He has no fidelity to this country, to the constitution or to his oath of office.‬

‪He tried to coerce the director of the FBI into ending the investigation of him — and when the director wouldn’t, Trump fired him. It’s only a matter of time before he fires the Special Prosecutor.‬

‪He has lied about his finances, his campaign’s dealings with Russia and just about everything else that has come out of his mouth. It is stunning to see how many untruths he speaks in a single day (this site keeps track of all of them on a daily basis).‬

‪But here’s something even more stunning than Trump’s high crimes and misdemeanors:‬

‪NOT ONE Democrat in the U.S. Senate has stood on that floor and called for his impeachment! Not one! Rep. Maxine Waters and other members in the House have not been afraid to do so. This morning, Rep. Steve Cohen was joined by Rep. Luis Gutierrez, Rep. Al Green, Rep. Marcia Fudge, Rep. John Yarmuth, and Rep. Adriano Espaillat in introducing five Articles of Impeachment against Trump. But no Democrat in the Senate has yet to say this man must be impeached!‬

‪This petition I’m asking you to sign isn’t just a challenge to the Republicans to clean house, it is a demand to the Democratic elected officials you and I voted for to DO THEIR JOB. Many of these Democrats have even said they are opposed to impeachment. They need to hear from us! Now! If recent history has proven anything, it’s that Democrats only act when we tell them to.‬

‪When you were opposed to George W. Bush getting ready to start a massive war in Iraq (when Iraq had nothing to do with 9/11), the majority of Democratic Senators voted to send us to war.‬ Most didn’t change their votes until the citizenry went to the polls in the Democratic primaries in 2008 and rejected the Democratic candidate for President who had voted FOR the war. These Democratic candidates became anti-war because of YOU.

‪For decades, when you believed our gay and lesbian brothers and sisters should be able to get married, the establishment Democrats (including the Clintons and Obamas) said NO and used their religion as an excuse to say that marriage can only be between a man and a woman. Only when the polls showed that a majority of Americans backed this basic civil right did Democratic leaders begin to “evolve.”‬

‪Although the majority of Americans have favored a single-payer universal health care system for some time — Medicare for All — it took until last month for 16 Democratic Senators to finally back such a bill.‬

‪The cautious and often-frightened Democratic leaders will usually, eventually, finally come around and do the right thing. And they do so because they are good at (sooner or later) listening to the will of the people.‬

‪That’s why they need to hear from you and me right now. Give them the backbone and support they’re looking for. Sign the Need to Impeach petition and let them see that the majority of us can’t wait any longer to remove this dangerous man from office.‬

‪Here’s the link once again. Share it and this letter with your friends and everyone you know who loves this country. Let’s not wait until he gets us in a war to sign this petition. Let’s not wait until he turns another million acres of federal land over to the oil companies. Let’s not wait until he and Betsy DeVos dismantle what’s left of our once-admired-around-the-world public schools. Every day at his EPA, at his ICE headquarters, at his FDA and elsewhere, his cronies are literally taking apart our American way of life, piece by piece — and it will take years to rebuild after all the damage they are doing.‬

‪Please, I appeal to you, join with me and millions of your fellow Americans and sign this impeachment petition now: www.needtoimpeach.com‬

‪Thank you for helping to save this country and this planet.‬