↑ Back to Top
GRATITUDE…a letter from Michael Moore
SHARE

Thank you for the thousands of emails, texts, phone calls, tweets, DMs, Facebook posts and Instagram comments, sharing your experience of watching “Fahrenheit 11/9” in the theater on opening weekend. I am overwhelmed. I am overjoyed. And my crew and I are so proud.

The film is a bona fide hit. Not a “Transformers” type hit (although the word from every theater manager was that hundreds of thousands of people left the theaters feeling very transformed!), and it’s not a “Fast and Furious” hit (although everyone who saw it knew that we all have just 6 weeks to move fast and be furious if we are ever to get rid of Trump!).

But check this out: 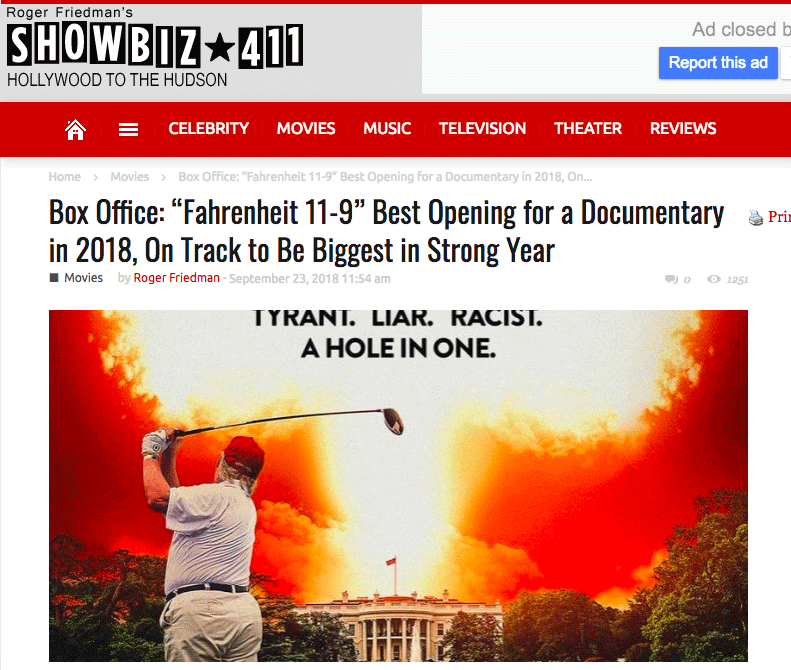 How cool is that? And in addition to having the largest opening weekend this year for a documentary, “Fahrenheit 11/9” had the 3rd most successful opening ever for a political doc! It was nearly three times greater than the opening weekend for my 2002 film, “Bowling for Columbine.”

The box office has already surpassed what we spent making this film! Not many movies can make that claim! Other than our first “Fahrenheit” movie 14 years ago, it just doesn’t get much better than this!

Although I subscribe to and love Netflix and Amazon Prime and Hulu, I still believe that a movie should be seen in a theater with other people sharing the same experience with you. Especially for “Fahrenheit 11/9.” As viewers and critics have attested to, it is a powerful, intense and exhilarating experience. Some audience members have been so moved by this film, they’ve taken to social media — get this — to offer to pay for anyone’s ticket — especially for those who usually don’t vote (America’s largest political party – “The NonVoters Party” – 100 million+ strong). Others just want as many people as possible to see this movie so they’ll just buy your ticket! This is crazy — I’ve never seen anything like this. 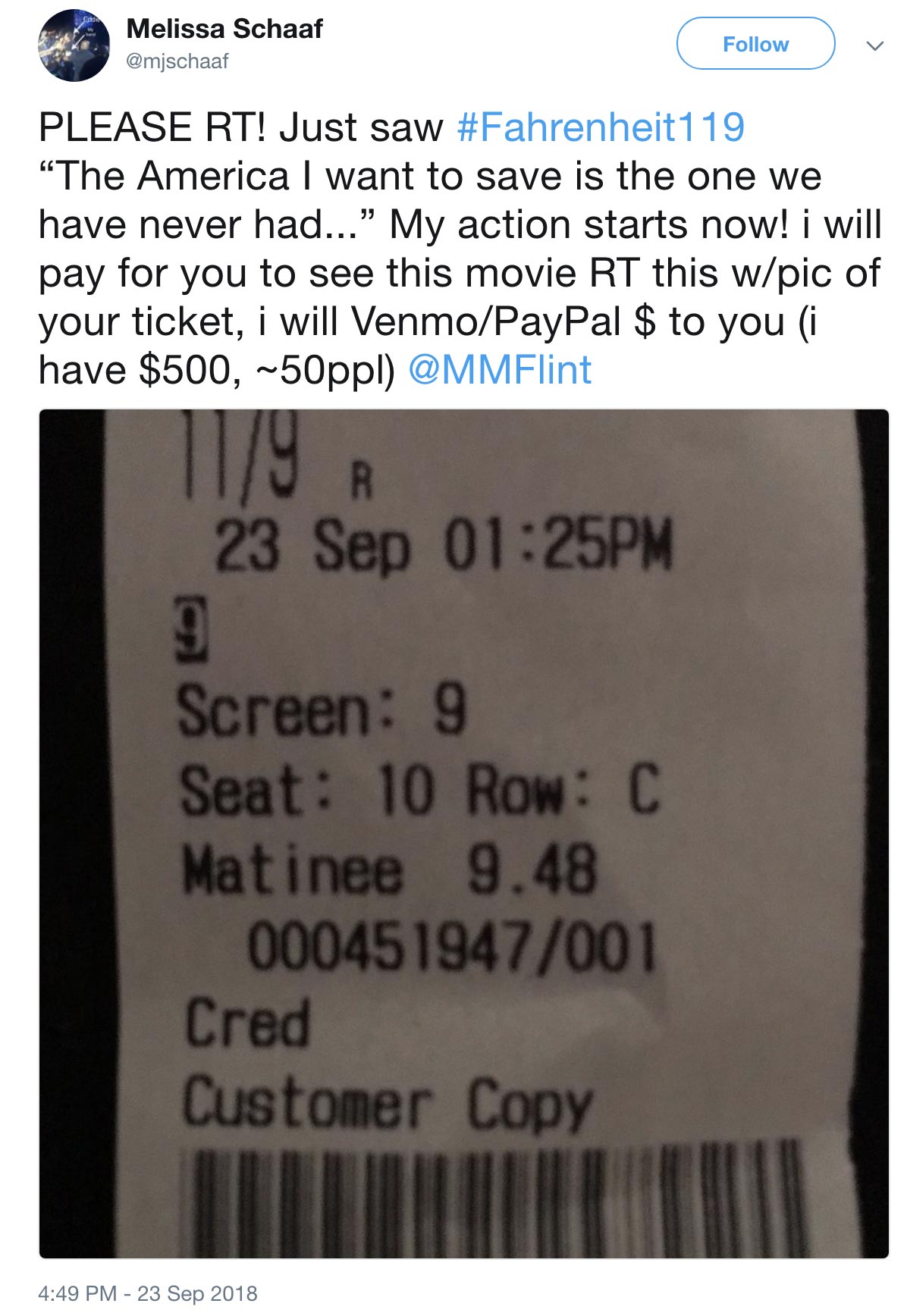 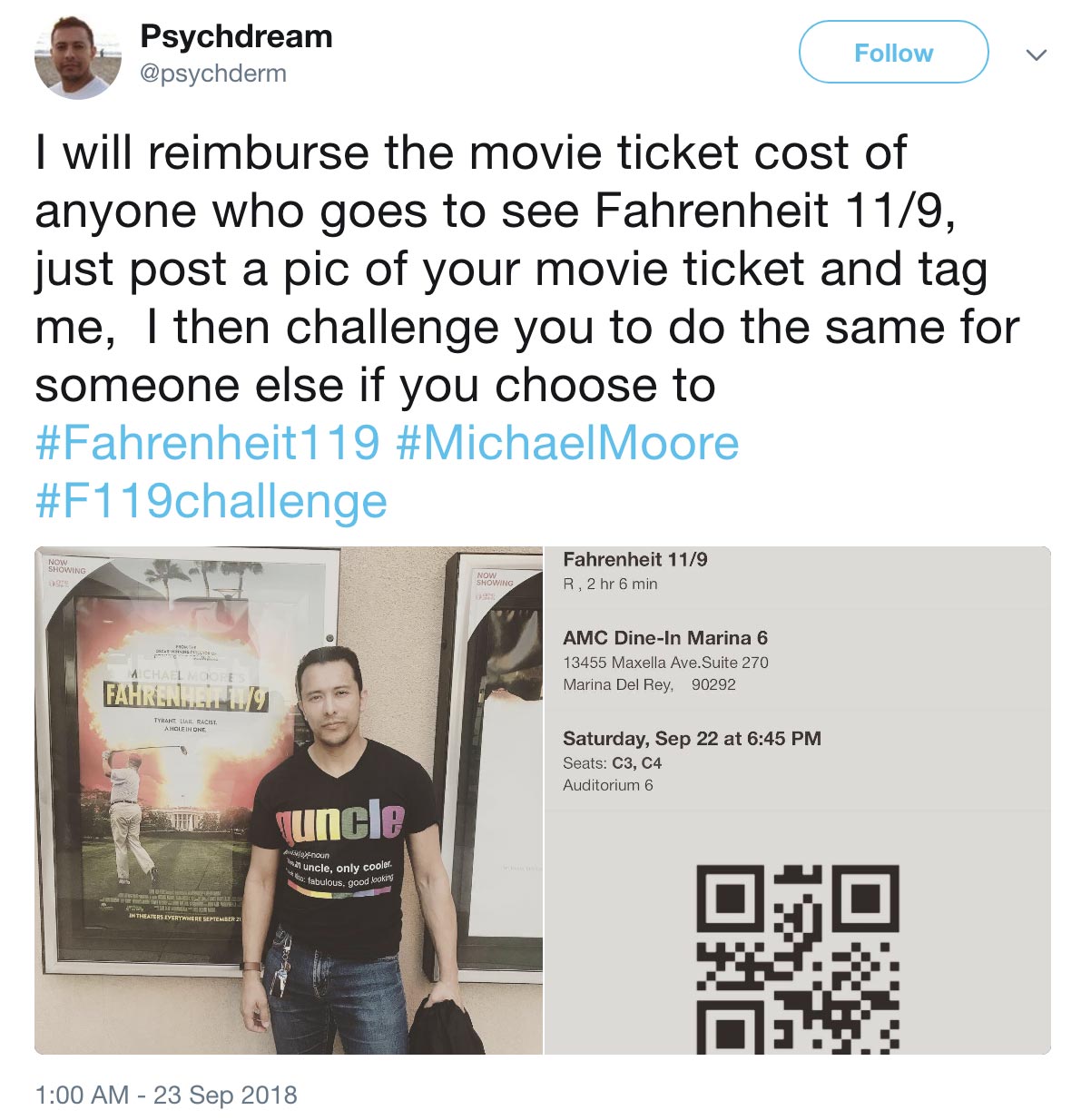 In Chicago, this man started a GoFundMe page to donate free movie tickets to “Fahrenheit 11/9” and help spread the word! 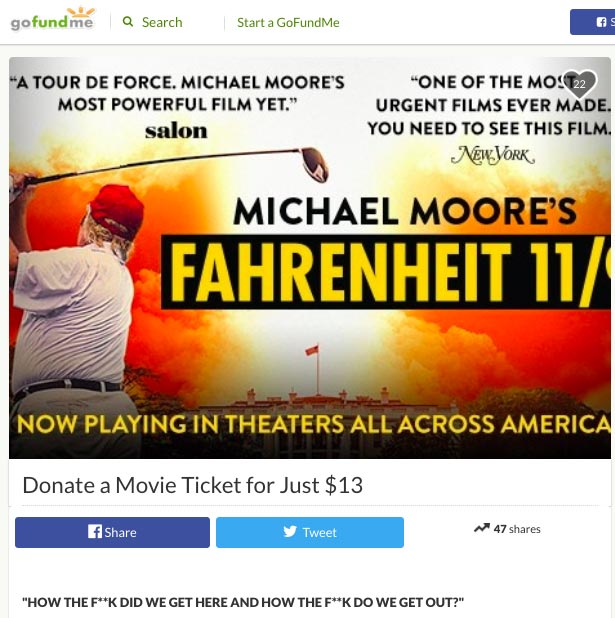 And then, unbeknownst to me, acclaimed cinematographer Jayme Roy, who has shot some of my films, and worked on “Fahrenheit 11/9,” was so impacted by finally seeing the finished film at the LA premiere last week, he made this offer to his Facebook friends: 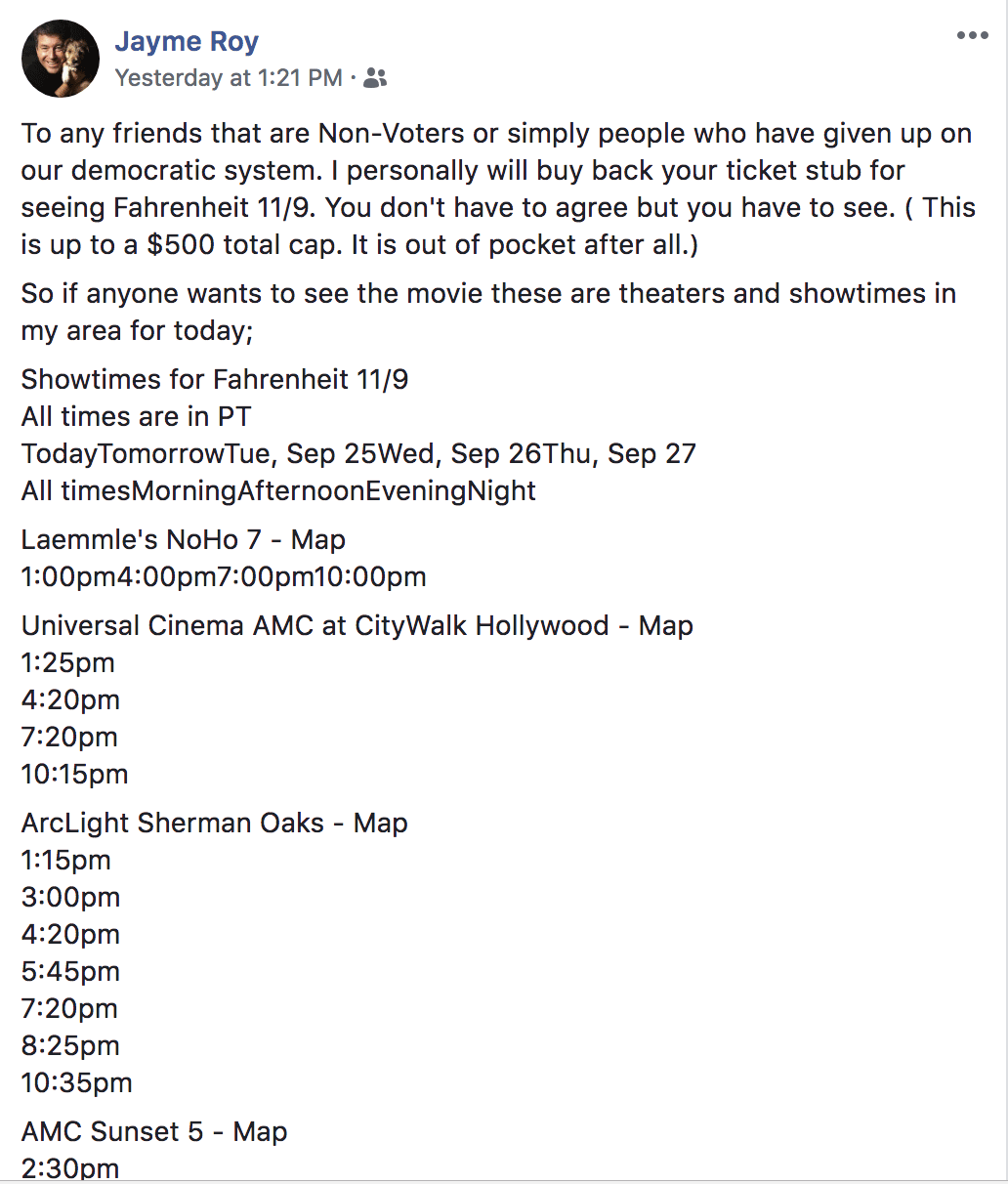 Yesterday, I received a note from Leila Jarman of Women’s Voices Now/GlobalGirl Media, a non-profit which promotes the voice and leadership capacity of young women by teaching them digital journalism and storytelling to affect social change. Leila was so touched by the film, that she asked about setting up a screening for all of the girls in her program. With Melissa Schaaf and Jayme Roy’s generosity as my inspiration, I told Leila that I’ll personally pay for a screening for GlobalGirl Media at a theater of their choosing.

I can’t tell you how strongly everyone is saying this movie has affected them and how they believe this film will affect change and get out the vote. Over and over people have said, “this movie must be seen by all Americans regardless of political party.” I know what they mean. My crew and I have told a story in “Fahrenheit 11/9” that you have not seen anywhere on the news, or found anywhere on social media.

Here’s an idea. If you have the financial means, I encourage you to do what Melissa and Jayme have done — offer to pay for 10 or 50 or 100 people who either can’t afford to go to the movies or pay for the people who are thinking of sitting out the midterm elections. I’m convinced that once a nonvoter sees this film, they won’t be nonvoting this time around!

Here’s another: go as a group! Gather your friends, neighbors, coworkers or local political group! It’s happening all over the country (and you can contact your local theater for a group discount!): 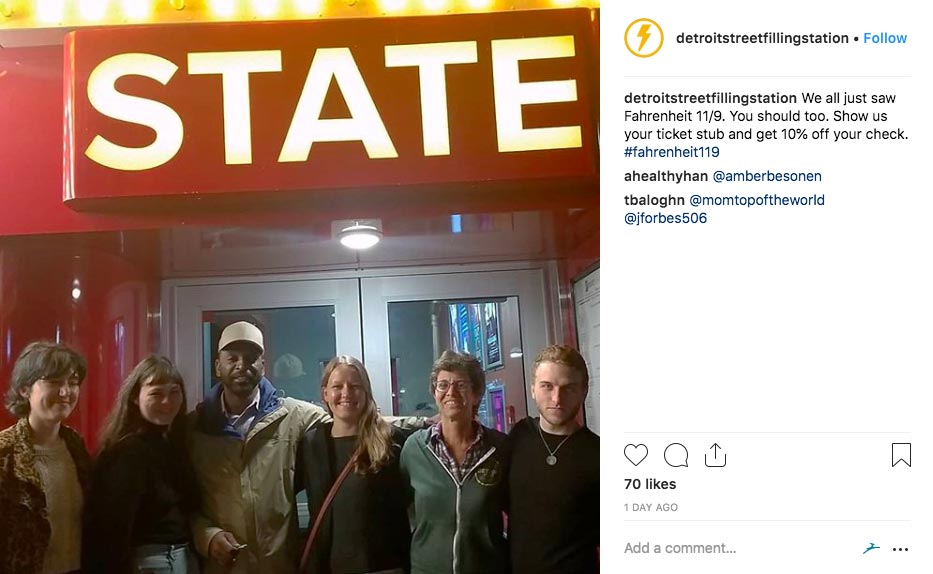 I want to see a tsunami of Americans at the polls on November 6th! This movie is my effort to help make that happen. Come see what I’m talking about — this film will eff you up in all the right ways — and when you leave the theater you will be 8 miles high, walking on sunshine and talkin’ bout a revolution.

Again, my immense gratitude to all who’ve seen “Fahrenheit 11/9”

P.S. Don’t forget – we will have less than 24 hours to stop the Trump/Republican rush to shove Brett Kavanaugh onto the Supreme Court. Check with MoveOn about today’s demonstrations. The Women’s March have actions planned (go to CancelKavanaugh.com) and if you live in Maine or Alaska, head to your pro-choice Republican Senator’s offices. This is it! Everyone off the bench and into the game!