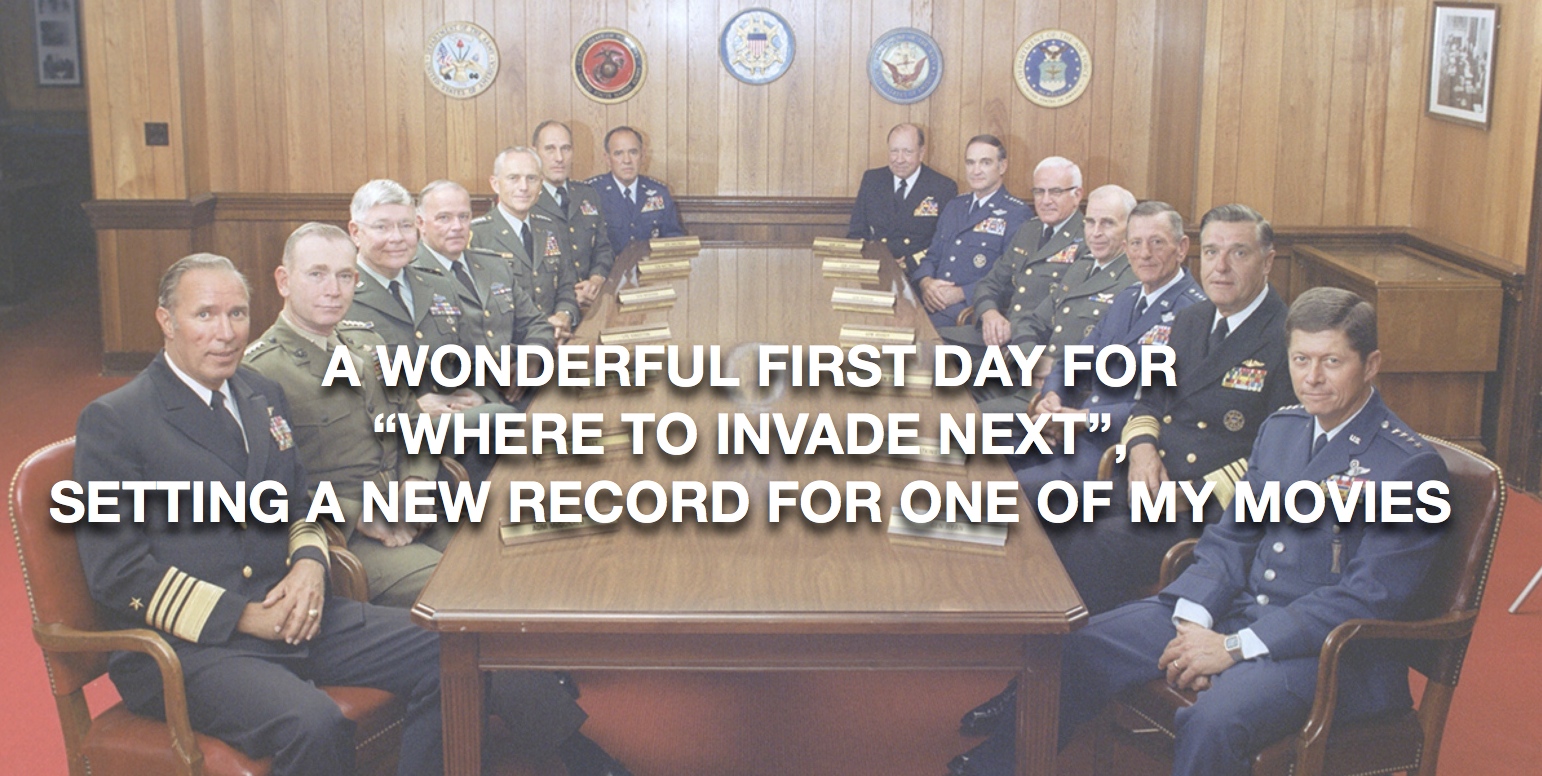 Well, I woke up to some pretty awesome news this morning:

It turns out, despite me being bedridden with pneumonia, and a deep freeze east of the Mississippi that brought 100-yr record lows and kept millions of people home, tens of thousands came out to the theaters last night to see my new movie. Here’s how the Hollywood trade publication DEADLINE reported it:

“Here’s something to put a smile on Michael Moore’s face while he’s battling pneumonia in the hospital: His latest documentary ‘Where To Invade Next’ is set to pull in the biggest limited opening (box office) of his career.”

Yes, it did put a smile on face! And it confirmed all the reports we were receiving all night long across the country. I know for those of you in the eastern half of the country it may seem like a crazy idea to leave the house today to go see a movie. But I’ve checked with all of our theaters and I’ve been assured that their movie houses are all warm and toasty and burning as much fossil fuel as possible (which in turn will bring about further climate calamities like this in the future). But, for now, we can watch movies! So go online (where it’s also nice and cozy) and get your tickets for tonight (link). Call a friend or two and take them with you! Forward this email around and go on social media to tell others that this is the weekend to see one of the best and most searing movies they’ll see this year.

Finally, I have heard from many of you in Flint that my movie is not playing there. I am so sorry that this happened. I just found out about it Wednesday night and was beside myself to learn that the distributor did this. My assistant went down to their office yesterday to try and see what happened and when she got there the place was empty. Turns out they had all taken off to go to some festival in Europe. So, on her own, she tracked down a cinema chain in Michigan and convinced them to book my movie to open next Friday in Flint (it’ll be at the NCG Trillium, a few miles outside of town). I know this isn’t her job or mine, but as I explained before, the distributor is new and just starting up. I keep calling them “the distributor” instead of by their name because they don’t have a name yet – that’s how new they are. So, like with this kerfuffle, I’ve had to do a bunch of the work myself, which I’m guessing probably contributed to me being run down. That and a dozen other things, I suppose. I’m feeling better today, and am getting better with each day. When I heard from someone at “the distributor” as to why they snubbed Flint, he told me the reason Flint wasn’t booked was that the theaters there had “low” grosses – in other words, there wasn’t much money to be made in Flint. Oh, really? What a surprise. It’s the second poorest city of its size in the country – of course they have “low grosses.” Not to mention no clean water to drink. At the very least, don’t they deserve to go to the movies, especially to a movie made by one of their own? Jesus. The distributor, sensing I might have taken some offense to this slight, did offer to set up a booking next week, but my assistant has taken care of it. They do mean well. They just have a lot on their plate. My apologies to the people in Flint. I promise, when I am well, to get back there, secure a facility in the inner city, and have a big free screening for everyone.

So bundle up everybody – you only have to walk from the house to the garage and then from the parking lot to the theater! Easy! Or, if you live out west or in Florida, a bike or a skateboard will do. Either way, let me know what you think – tweet your comments or pix of yourselves at the theater and I’ll RT and Facebook them.

Thanks for being part of this weekend with me.

P.S. I have been blown away by all the tweets I’m getting and have been retweeting them from my account. Keep them coming! Here are some of my favorites:

Saw @MMFlint‘s new movie in a packed theater in the burbs. Applause. Most common thing said by folks leaving: “It made me think.”

@MMFlint I haven’t cried that much while laughing since childbirth. It’s so amazing- Thank you for this film- change will result- it MUST.

Hours later and I am still processing #WhereToInvadeNext by @MMFlint. Everyone has simply got to go see it! Mind Blown ❤️👏

@MMFlint “W2IN” is Moore’s tour de force–A genius piece, and soon, all the dunces will be in a confederacy against him. H. Zinn is smiling!

#WhereToInvadeNext is absolutely stunning. A true masterpiece! Thank you, @MMFlint

By the end of #WhereToInvadeNext it takes a turn and becomes one of the most patriotic films I’ve ever seen. https://t.co/YhQlKaUol2

@MMFlint second time watching this film and it was even better this time! HOW. IS. THAT.EVEN. POSSIBLE. pic.twitter.com/8LCTa6iiYM

I was blown away by @MMFlint‘s film #WhereToInvadeNext. This is the most important film of the past 50yrs. #WeNeedARevolution

I traveled 50 miles to see your movie tonight. It was worth every mile and every penny. @MMFlint #wheretoinvadenext pic.twitter.com/qICZi13szk

@MMFlint Saw Where to Invade Next today. Bring tissues! I laughed! I cried! (Seriously, I cried a lot)My favorite of his films yet! #amazing