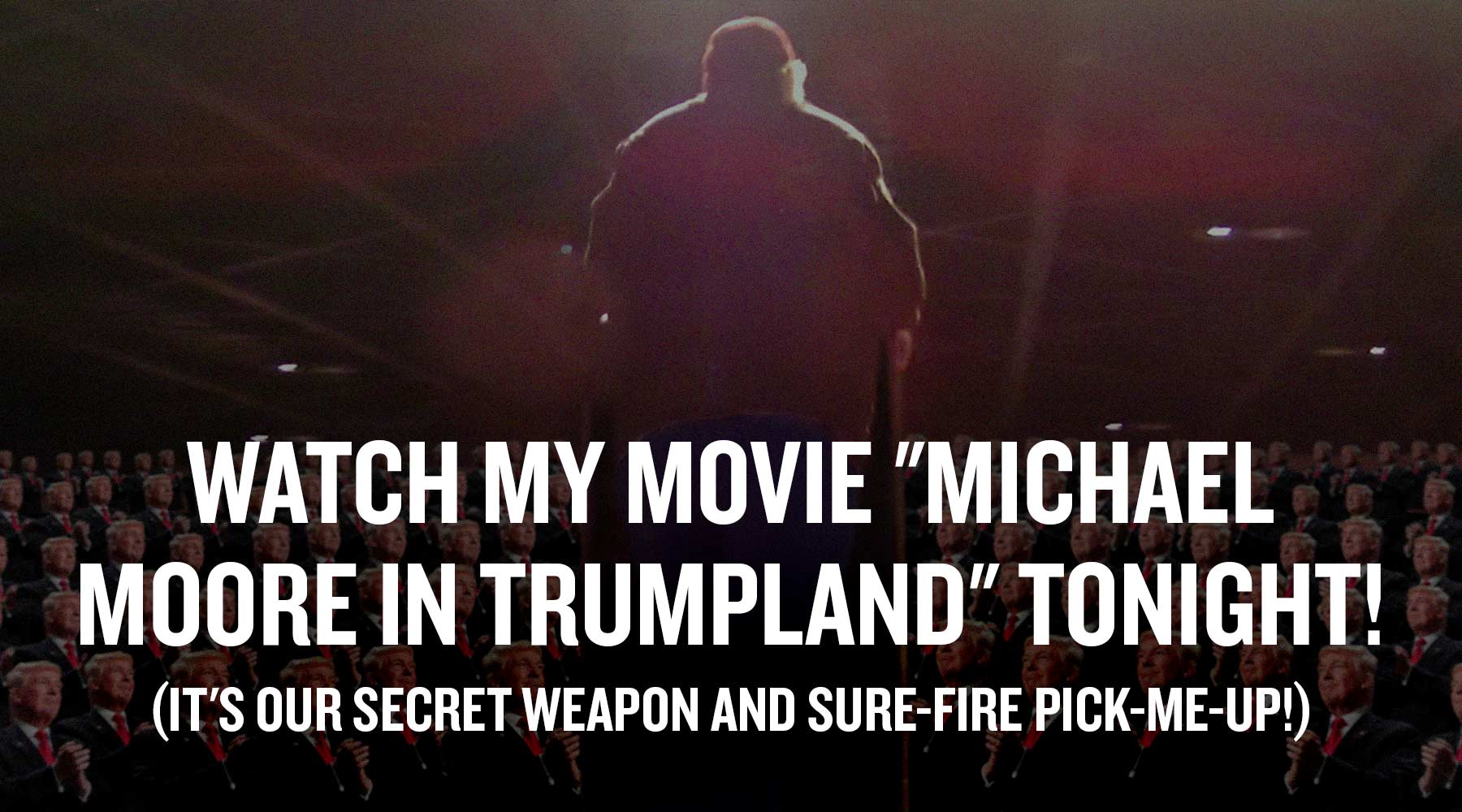 On Tuesday we are either facing a new future that will have equal pay for women, paid maternity leaves, and a debt-free college education — or we face utter madness. A dark, authoritarian era run by a thin-skinned sociopath and admitted sexual predator. How can this election even be close? MADNESS!

There’s probably no time left to try and convince Trump voters of the error of their ways. But there IS a job we all must do this weekend: get the nonvoters to vote! Give our young people a reason to vote!

And I’ve made a film that will help you to do just that. Critics are calling it “a game changer,” “an unexpected, empathetic appeal to those not inclined to vote for Hillary Clinton,” and “if the liberal choir needs a song to sing, this is the one that will inspire them.”

It’s called “Michael Moore in TrumpLand” and it’s #1 in the country online and streaming!

You can get it right now on iTunes by clicking here:
www.itunes.com/trumpland.

Or you can get it right now on Amazon by clicking here:
https://amzn.com/B01M4OX2AY.

“TrumpLand” has been referred to by one commentator as “already historic in its impact.” The New Yorker magazine simply says it’s “majestic.” And, even though I don’t have a distributor, a budget or a single ad placed anywhere, through word-of-mouth my movie has become an unexpected hit.

It has been #1 for the past two weeks on iTunes! It’s also been playing in cinemas in 61 cities because 61 theaters asked if they could download it and put it up on their screens — and I said yes, and thanks!

I urgently made “TrumpLand” in just 12 days and yet it’s considered every bit as powerful as the rest of my work. How is that? Because as this presidential race tightened, pure passion – and fear –  took over and I just went for it.

I called up and brought back together my top producers and crews from “Fahrenheit 9/11”, “Roger & Me” and “Sicko”, plus the people from my TV series “TV Nation” and “The Awful Truth” — and we set out traveling to battleground Ohio to film me perform a one-man show in the most unlikely of places — a majority-Republican town where only 8% of its citizens are registered Democrats!

The result is a raucous, funny, fresh look at how we can win in these final four days — a 73-minute pick-me-up and fire-you-up! Watch “Michael Moore In TrumpLand” tonight, show it to your friends tomorrow. And send it as an online gift to your conservative brother-in-law or your cousin who’s down in the dumps about the polls she’s reading about.

If you’ve got someone in the house who’s thinking of not voting and in need of a different sort of appeal, one that’s convinced tens of thousands across the country to show up on Tuesday, then watch and share “TrumpLand” on iTunes at www.itunes.com/trumpland or on Amazon at https://amzn.com/B01M4OX2AY!

And here are two clips from the film:

P.P.S. And here’s that great review from The New Yorker:
http://www.newyorker.com/culture/richard-brody/what-michael-moore-understands-about-hillary-clinton