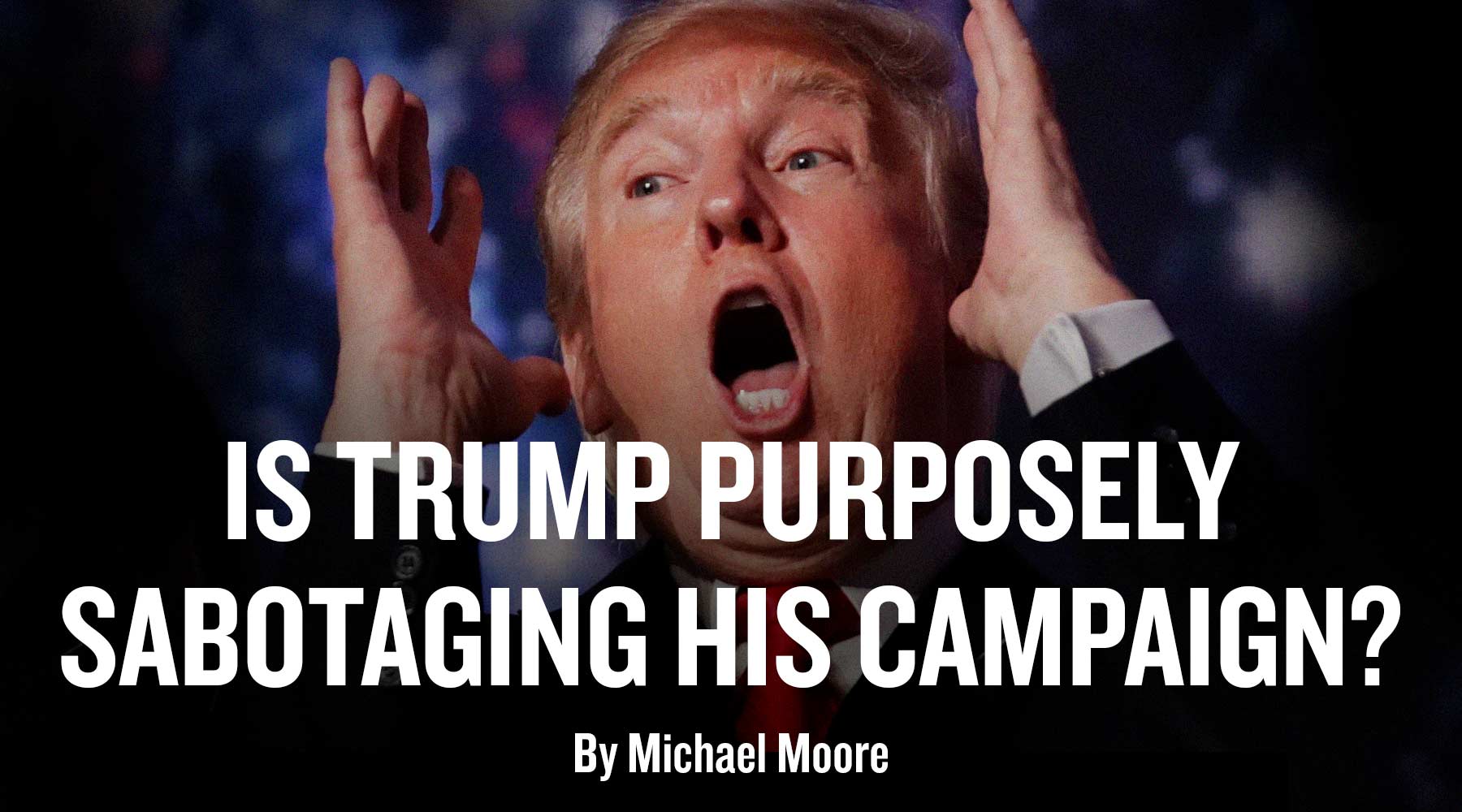 Donald Trump never actually wanted to be President of the United States. I know this for a fact. I’m not going to say how I know it. I’m not saying that Trump and I shared the same agent or lawyer or stylist or, if we did, that that would have anything to do with anything. And I’m certainly not saying that I ever overheard anything at those agencies or in the hallways of NBC or anywhere else. But there are certain people reading this right now, they know who they are, and they know that every word in the following paragraphs actually happened.

Trump was unhappy with his deal as host and star of his hit NBC show, “The Apprentice” (and “The Celebrity Apprentice”). Simply put, he wanted more money. He had floated the idea before of possibly running for president in the hopes that the attention from that would make his negotiating position stronger. But he knew, as the self-proclaimed king of the dealmakers, that saying you’re going to do something is bupkus — DOING it is what makes the bastards sit up and pay attention.

Trump had begun talking to other networks about moving his show. This was another way to get leverage — the fear of losing him to someone else — and when he “quietly” met with the head of one of those networks, and word got around, his hand was strengthened. He knew then that it was time to play his Big Card.

He decided to run for President.

Of course he wouldn’t really have to RUN for President — just make the announcement, hold a few mega-rallies that would be packed with tens of thousands of fans, and wait for the first opinion polls to come in showing him — what else! — in first place! And then he would get whatever deal he wanted, worth millions more than what he was currently being paid.

So, on June 16th of last year, he rode down his golden escalator and opened his mouth. With no campaign staff, no 50-state campaign infrastructure — neither of which he needed because, remember, this wasn’t going to be a real campaign — and with no prepared script, he went off the rails at his kick-off press conference, calling Mexicans “rapists” and “drug dealers” and pledging to build a wall to keep them all out. Jaws in the room were agape. His comments were so offensive, NBC, far from offering him a bigger paycheck, immediately fired him with this terse statement: “Due to the recent derogatory statements by Donald Trump regarding immigrants, NBCUniversal is ending its business relationship with Mr. Trump.” NBC said it was also canceling the beauty pageants owned by Trump: Miss USA and Miss Universe. BOOM.

Trump was stunned. So much for the art of the deal. He never expected this, but he stuck to his plan anyway to increase his “value” in the eyes of the other networks by showing them how many millions of Americans wanted Him to be their Leader. He knew, of course (and the people he trusted also told him) that there was no way he was actually going to win many (if any) of the primaries, and he certainly would not become the Republican nominee, and NEVER would he EVER be the President of the United States. Of course not! Nor would he want to be! The job of being President is WORK and BORING and you have to live in the GHETTO of Washington, DC, in a SMALL 200-yr. old house that’s damp and dreary and has only TWO floors! A “second floor” is not a penthouse! But none of this was a worry, as “Trump for President” was only a ruse that was going to last a few months.

And then something happened. And to be honest, if it happened to you, you might have reacted the same way. Trump, to his own surprise, ignited the country, especially among people who were the opposite of billionaires. He went straight to #1 in the polls of Republican voters. Up to 30,000 boisterous supporters started showing up to his rallies. TV ate it up. He became the first American celebrity to be able to book himself on any show he wanted to be on — and then NOT show up to the studio! From “Face the Nation” to “The Today Show” to Anderson Cooper, he was able to simply phone in and they’d put him on the air live. He could’ve been sitting on his golden toilet in Trump Tower for all we knew –and the media had no problem with any of that. In fact, CBS head Les Moonves famously admitted that Trump was very good for TV ratings and selling ads — music to the ears the NBC-spurned narcissist.

Trump fell in love with himself all over again, and he soon forgot his mission to get a good deal for a TV show. A TV show? Are you kldding – that’s for losers like Chris Harrison, whoever that is (host of “The Bachelorette”). He was no longer king of the dealmakers — he was King of the World! His tiniest musings would be discussed and dissected everywhere by everybody for days, weeks, months! THAT never happened on “The Apprentice”! Host a TV show? He was the star of EVERY TV SHOW — and, soon, winning nearly every primary!

And then… you can see the moment it finally dawned on him… that “Oh shit!” revelation: “I’m actually going to be the Republican nominee — and my rich beautiful life is f#*@ing over!” It was the night he won the New Jersey primary. The headline on TIME.com was, “Donald Trump’s Subdued Victory Speech After Winning New Jersey.” Instead of it being one of his loud, brash speeches, it was downright depressing. No energy, no happiness, just the realization that now he was going to have to go through with this stunt that he started. It was no longer going to be performance art. He was going to have to go to work.

Soon, though, his karma caught up with him. Calling Mexicans “rapists” should have disqualified him on Day One (or for saying Obama wasn’t born here, as he did in 2011). No, it took 13 months of racist, sexist, stupid comments before he finally undid himself with the trifecta of attacking the family of a slain soldier, ridiculing the Purple Heart and suggesting that the pro-gun crowd assassinate Hillary Clinton. By this past weekend, the look on his face said it all — “I hate this! I want my show back!” But it was too late. He was damaged goods, his brand beyond repair, a worldwide laughing stock — and worse, a soon-to-be loser.

But, let me throw out another theory, one that assumes that Trump isn’t as dumb or crazy as he looks. Maybe the meltdown of the past three weeks was no accident. Maybe it’s all part of his new strategy to get the hell out of a race he never intended to see through to its end anyway. Because, unless he is just “crazy,” the only explanation for the unusual ramping up, day after day, of one disgustingly reckless statement after another is that he’s doing it consciously (or subconsciously) so that he’ll have to bow out or blame “others” for forcing him out. Many now are sensing the end game here because they know Trump seriously doesn’t want to do the actual job — and, most importantly, he cannot and WILL NOT suffer through being officially and legally declared a loser — LOSER! — on the night of November 8th.

Trust me, I’ve met the guy. Spent an afternoon with him. He would rather invite the Clintons AND the Obamas to his next wedding than have that scarlet letter (“L”) branded on his forehead seconds after the last polls have closed on that night, the evening of the final episode of the permanently cancelled Donald Trump Shit-Show.

Postscript:
Don, if you’re reading this, do it soon. Give your pathetic party a chance to pick up the pieces and nominate Ryan or Romney so they can be the ones to lose the White House, the Senate, the House and yes, praise Jesus and the Notorious RBG, the Supreme Court. Don’t be too hard on yourself. You’re only the logical conclusion to a party that has lived off the currency of racism and bigotry and fellating the 1% for decades, and now their Trump has come home to roost.