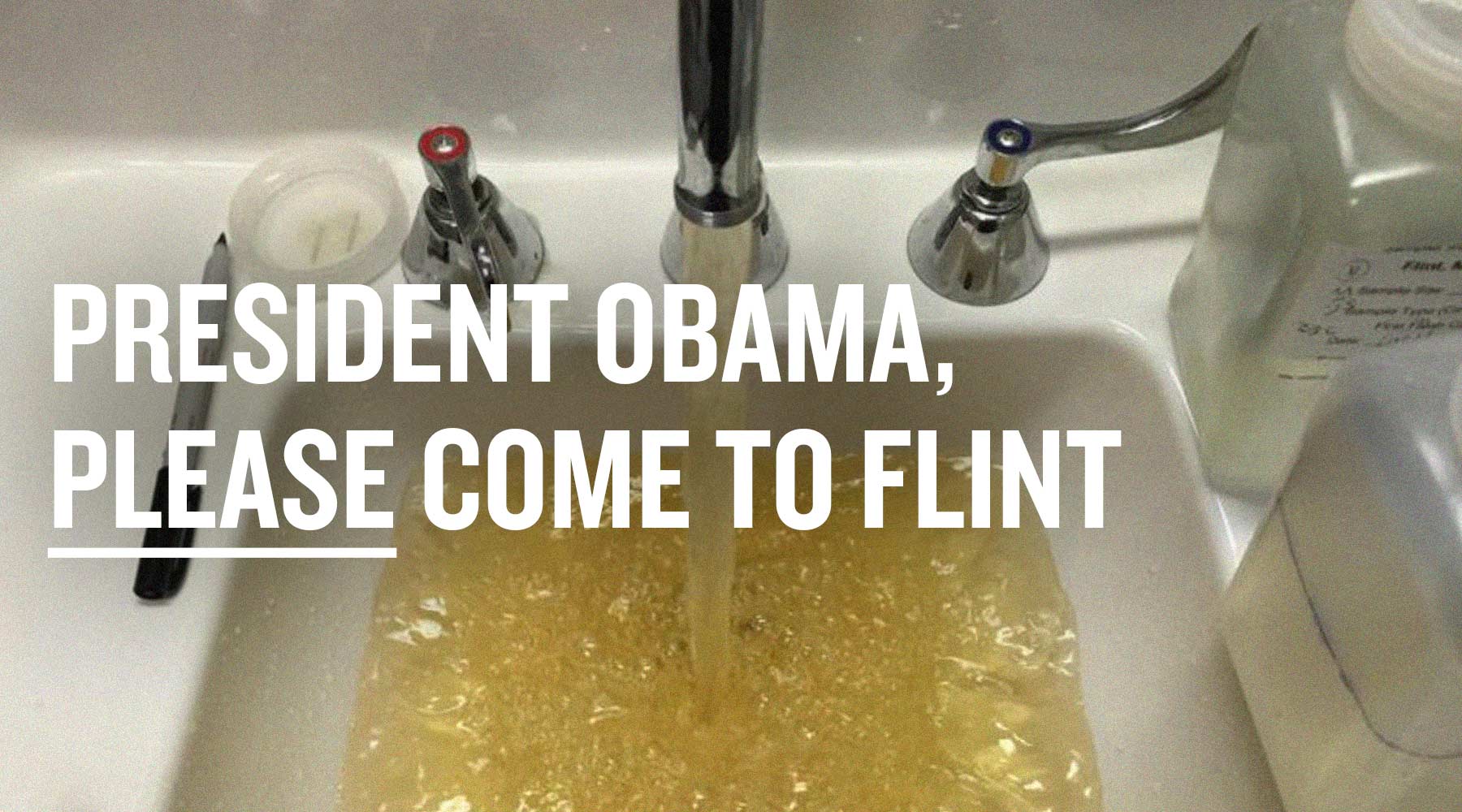 I am writing this to you from the place where I was born — Flint, Michigan. Please consider this personal appeal from me and the 102,000 citizens of the city of Flint who have been poisoned — not by a mistake, not by a natural disaster, but by a governor and his administration who, to “cut costs,” took over the city of Flint from its duly elected leaders, unhooked the city from its fresh water supply of Lake Huron, and then made the people drink the toxic water from the Flint River. This was nearly two years ago.

This week it was revealed that at least 10 people in Flint have now been killed by these premeditated actions of the Governor of Michigan. This governor, Rick Snyder, nullified the democratic election of this mostly African-American city — where 41% of the people live below the “official” poverty line — and replaced the elected Mayor and city council with a crony who was instructed to take all his orders from the governor’s office.

One of those orders from the State of Michigan was this: “It costs too much money to supply Flint with clean drinking water from Lake Huron (the 3rd largest body of fresh water in the world). We can save a lot of money doing this differently. So unhook the city from that source and let them drink the water known as ‘General Motors’ Sewer’ — the Flint River.”

And, lo and behold, the Governor was right. It was a lot cheaper! Fifteen million dollars cheaper! And for saving all that money, it is now estimated that to repair the damaged water system in Flint, it will cost at least $1.5 billion. Someone had suggested to the governor, before he did this, that the river contained many toxins. He ignored that. One of his own people said maybe they should add a safe-to-drink “corrosive protector” to the water so that the toxins in said water wouldn’t leach the lead off the aging water pipe infrastructure and into the drinking water. “How much will that cost?” asked the governor’s office.

“Just $100 a day for only 3 months,” the governor was told. Oh, $100 a day?! THAT’S TOO MUCH!, came the reply from the governor. Don’t worry about the lead. “Lead is a seasonal thing,” he would later explain to the public. “Heck, there’s lead in everything!” Just let them drink the river water.

This is a city full of poor black people, a city where half the population (including myself) found a way to escape the misery and the madness (the crime rate is so bad, we’ve lead the country in murders for most years — and just to get an idea of what that means, if NYC had the same murder rate as Flint last year, over 4,000 New Yorkers would have been killed, instead of the 340 who actually were).

My city has been pummeled by General Motors, Wall Street and the State and Federal governments. It’s no surprise that the Republicans who control our State Capitol in Michigan didn’t have to worry about any push-back from the residents of Flint because, to them, that’s just a bunch of eviscerated black people who have absolutely no power, “don’t vote for us any way,” and have NO means to fight back.

And now, after every single child in Flint has been poisoned with lead-filled water that the State knew a year ago was in that water, we learn that the governor’s office sought to cover it up, hiding it not just from the defenseless African Americans they secretly fear and despise, but also hiding it from YOU and the federal government! (Link)

And, as if things couldn’t get any worse, the news of 87 people with Legionnaires Disease happened this week. Ten Flint residents have been KILLED by this disease which is caused by tainted water. Not by gun violence, not in Afghanistan, but by an act of racism and violence perpetrated by the — I’m sorry to say — white, Republican governor of Michigan who knew months ago the water was toxic.

All fingers from the doctors and scientists point to the filthy, toxic Flint River as the cause of this Legionnaires Disease outbreak. 10 human souls deceased. In an average year, Flint already had an astounding 8 cases (and rarely a death) of people contracting Legionnaires Disease. Since the citizens of Flint were forced to use the water from the Flint River, EIGHTY-SEVEN CASES OF LEGIONNAIRES DISEASE have happened! AND TEN DEATHS! And the number is expected to rise.

President Obama — the people of Flint are crying out to you for help. Our Congressman, Dan Kildee, has called the federal government for assistance. But he’s been told that it’s a “State issue” and that “the State of Michigan has to be the one asking the feds for the help.”

NO! The STATE is the one who CAUSED THIS! That’s like asking the fox if he could repair the chicken coop. No, Mr. President, we need YOUR help — TODAY. 100,000 people have no water to drink, to cook with or to bathe in.

This week, you are coming to Michigan to attend the Detroit Auto Show. We implore you to come to Flint, less than an hour’s drive north of Detroit. Do not ignore this tragedy taking place every day. This may be Gov. Snyder’s Katrina, but it will become your Bush-Flying-Over-New Orleans Moment if you come to Michigan and then just fly away. I know you don’t want that image of flying over us as you “fake-sad” look down on Flint just as Bush did in that never-to-be-forgotten photo-op over New Orleans. I know you are going to come to the rescue here in Flint. I can’t imagine any other scenario.

President Obama, I’m counting on you to give us a response. Can we expect to see you, in Flint, in the next few days?

UPDATE:
P.S. President Obama, thank you for responding so quickly to us in Flint. To have you declare a Federal State of Emergency for Flint after our letter to you — and to do it while we were all gathering for our rally in Flint today — that was a big boost of hope to everyone present.

Until, that is, we all got home and actually read your Order.

It turns out you are sending only $5 million in aid — and you are not sending it to Flint, you are sending it to the corrupt Governor Snyder who triggered the poisoning of Flint in the first place! Your Order says you’re invoking FEMA — and ONLY FEMA’s –help for just 90 days, and that all FEMA is to do is ship in bottles of water and filters. No EPA being sent to Flint. No CDC. No Army Corps of Engineers! Are you kidding me? Do you have any idea of the catastrophe that has taken place here? The entire water infrastructure to every single home in Flint has been ruined. 102,000 people have been knowingly poisoned by a host of toxins — including every single child who now has some level of irreversible brain damage. You read that right – every single child.

You need to strengthen and expand your emergency order to fix this disaster, and you need to come to Flint after you look at all the bright, shiny new cars at the Detroit Auto Show on Wednesday. Mr. Obama, if not to Flint, then where?